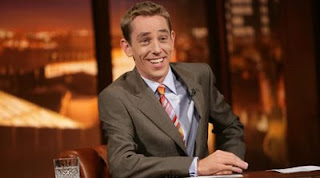 A new Late Late Show host fumbles the ball. Pat "the plank" Kenny has handled the torch to Ryan "great connections" Tubridy. Isn't he Cathal Goan's cousin or something like that?

Stealing a little style from both David Letterman and Jon Stewert, Tubridy Tonight the new Late Late begins. It was better than dismal but Tubsy was a tad patronising to virtually all his guests and audience.

The interview with Biffo was a mix of great and fail. Bet Biffo's fist was itching to punch Tubsy at the end. But it wouldn't be good considering the FF connection. Biffo's numbers might actually rise though. At least the interview gave us such classic quotes as

"I don't drink too much"
"I rebel against politically correct culture"

I'm sorry did I write classic, I meant mildly interesting. Tubridy did bring up JOD's expenses, Biffo's drinking as well as simpler questions such as do you like being Taoiseach.

I wish I had turned off the telly then and missed Tubridy's infantilising and sexist comments about Sharon Corr. But the worst part was the disgusting interview with Brian McFadden about McFadden's ex wife Kerry Katona. McF was playing the innocent absentee father and both of them were casting Katona into the evil bitch mold. Real classy act there Tubsy - attack a women who is not there to defend herself and egg on her douchebag ex husband to wax lyrical about what a terrible mother / person / creature she is. And bringing on McF's mother to diss Katona is more of the same. It just shows that you had preplanned to tear Katona to shreds. Is there no sure thing as balance on your IKEA-decorated set? Or will Katona be on next week?

McF admitted that he knows nothing except for the tabloid stories. So why the vicious gossip-mongering and bringing on the poor Irish mammy and her son to slut-shame a woman who is not present and about whom no one has had contact? Dragging the Late Late to a new low.

Don't think I'll be tuning in on a regular basis.
Posted by Mór Rígan at Saturday, September 05, 2009

Interesting points, but I think the show was a much bigger success than you're giving it credit for.
Go to twitter .com and enter #lltub into the search bar.
Find out the wider opinion on the show.
Thanks.
M.

I was twittering away last night so I already know the wider opinion on the show M. They are not as uniform as you might interpret.

I do think that the interview with Brian Cowen went well and Tubridy did ask some good questions. There was little follow up though.

But the interview with McF and Tubridy's comments about Corr really left a bad taste in my mouth. It was trainwreak tv and very offensive.

What's all this about?